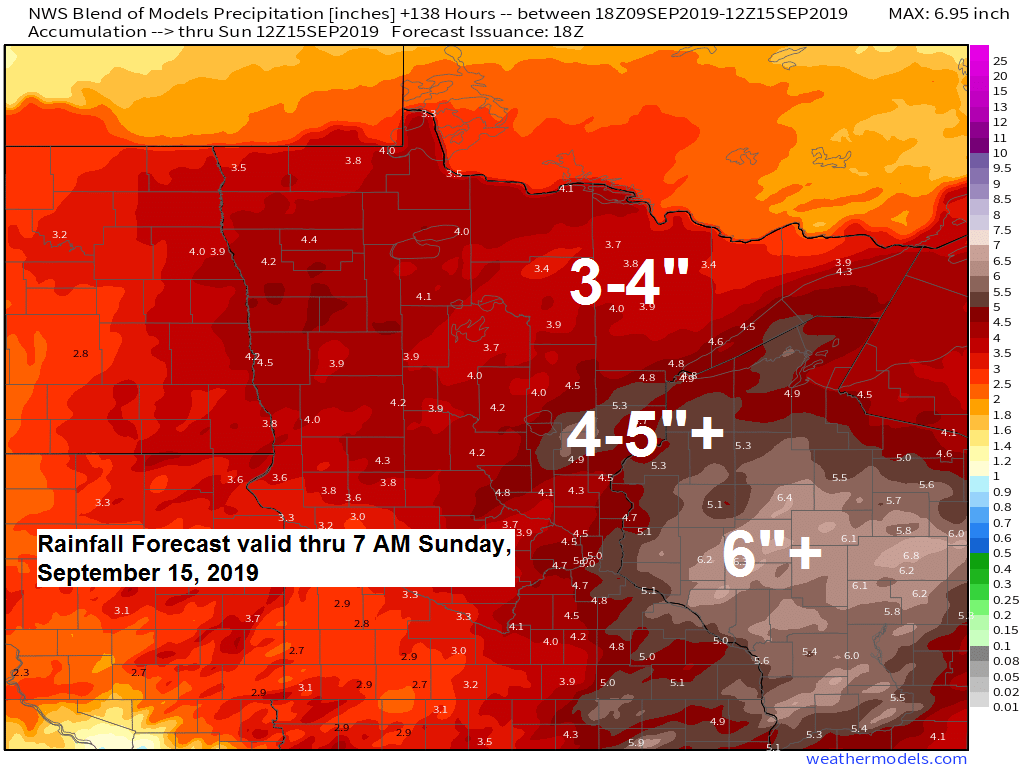 A wet and gloomy Monday night in the Northland, but nicer weather is on the way for Tuesday (especially during the afternoon)

Rain has been lifting north/east through the Northern Plains and upper Midwest today.

Computer models continue to show quite a bit of rain falling in the Northland through this weekend. The rain will come in waves, and by Sunday rainfall totals could reach into the 3 to nearly 5 inch range in northeast Minnesota and northwest Wisconsin.

The setup on Thursday looks kind of similar to what we have in place today (Monday) although Thursday’s low and trough might be a little stronger compared to today’s system, and the warm front may setup a little farther north compared to today. Note: I’m a little concerned about a severe weather and tornado threat Thursday especially in south-central and southeast portions of Minnesota with the expected setup per model data, something to watch the next few days.

Computer models continue to be in good agreement showing a big warm up for next week which could mean widespread 70s and even some 80s in the Northland roughly from around September 15 through September 20. Will we set some warm temperature records next week? Stay tuned.

Also of note for next week is the potential for a humid airmass more similar of July rather than mid September. Dew points from 60 to 70 degrees are possible at times over much of the upper Midwest next week.

Quick weather changes the next few days. Rainy and cool tonight followed by milder temps and dry weather for Tuesday which is followed by a windy, cool and wet mid to late week.

The first of a couple rain events this week is currently affecting the Northland late this afternoon with an area of low pressure lifting E-NE across South Dakota while a warm front lifts slowly north out of central Iowa.

Rain with a few thunderstorms will continue in the area tonight but rain coverage should become more scattered from SW-NE during the night. Occasional lightning and downpours will be the primary hazards with any thunderstorm tonight, but severe weather is not expected with only a small amount of instability (MUCAPE generally less than 500 J/kg)

Lows tonight will hold fairly steady in the 50s, but could rise into the 60s overnight over southern portions of the area depending on how far north the warm front gets later tonight.

An area of low pressure with its warm front and cold front will exit to the east by Tuesday afternoon. Areas of fog, drizzle and isolated showers Tuesday morning should give way to partly to mostly cloudy skies Tuesday afternoon. Highs will range from the lower 60s in far northern Minnesota to the low to mid 70s in eastern Minnesota and northwest Wisconsin. Winds will shift from the east to the west.

A few showers are possible during the day Wednesday with a greater chance for rain late Wednesday night into Thursday night as the next organized weather system heads into the upper Midwest. Gusty northeast winds and cool temps will be found in the Northland Wednesday and Thursday as will remain north of a warm front.