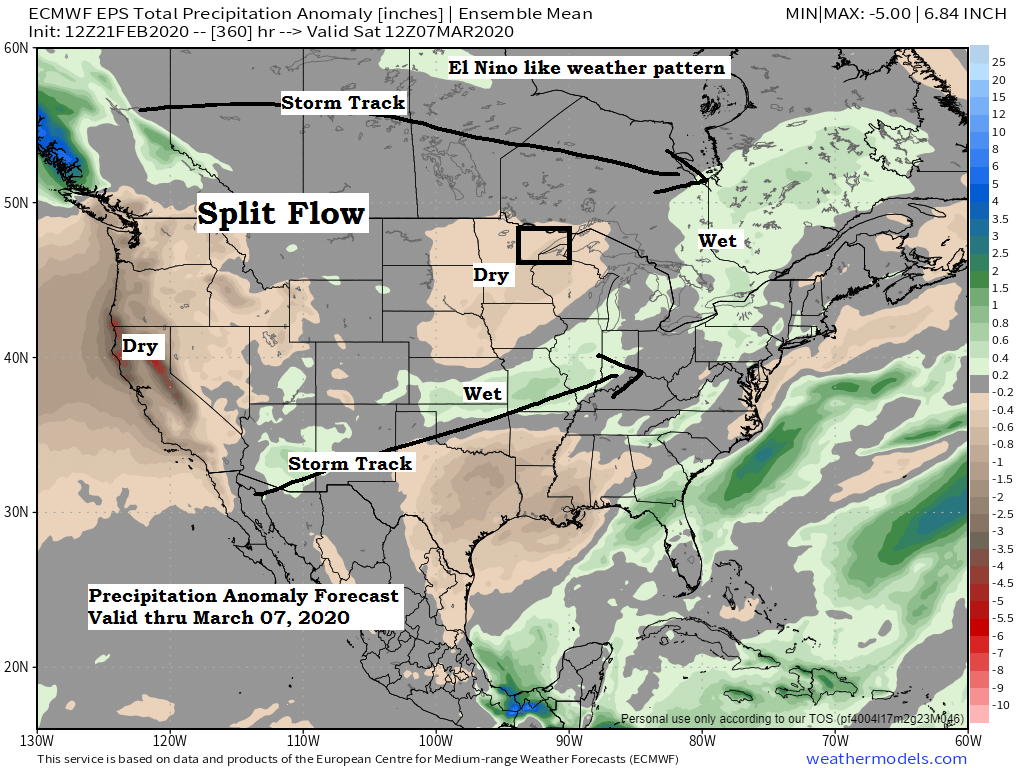 Looks like the month of February will go out on a quiet note across the Northland with no major storms affecting the area through the end of the month, and this quiet weather pattern looks like it may continue into early March.

*5.4″ of snow has fallen so far this month in Duluth , we might add a few tenths of an inch to that total by the end of the month (low chance that happens) but February 2020 will likely finish about 7″ below normal in the snowfall department.

A stunning satellite loop of Lake Superior on this late February day 2020.

The lack of ice over the lake at this time of year is remarkable, sure it’s happened before, but it has been a while where there’s been this little ice covering Lake Superior in late winter.

Typically ice coverage on Lake Superior peaks in early March at ~50%, but I think there’s a good chance we’ve already reached peak ice coverage for 2020 (~20 to 25%)

Warm air continues to move east today kicking the arctic air off to the east.

Hard to believe that we had lows in the 30s to around 40 BELOW ZERO in parts of the Northland Thursday morning, and now we have temperatures in the 30s to lower 40s ABOVE ZERO this Friday afternoon, quite a turnaround in a short period of time.

Looks like temperatures will be trending colder across the Northland for the middle to end of next week due to that low down near the Ohio Valley and the northerly flow on the NW side of that low which will help tug some colder Canadian air south into the region. At the moment this doesn’t look like a major arctic blast, but perhaps cold enough to drop temperatures a little below normal from ~February 26 to 28.

An early spring feel this weekend!

Could see some areas of low clouds/fog develop at night, lingering into the morning hours due to some melting snow, but I still think will see quite a bit of sunshine this weekend, especially on Saturday.

Cool tonight with lows in the single digits and teens. Warms up nicely on Saturday with highs in the 30s to lower 40s. Note: A few locations across the Northland may be as warm as 44-46 degrees Saturday afternoon.

‘Cold’ front moves through the area Sunday morning, still mild though with highs on Sunday in the 30s.