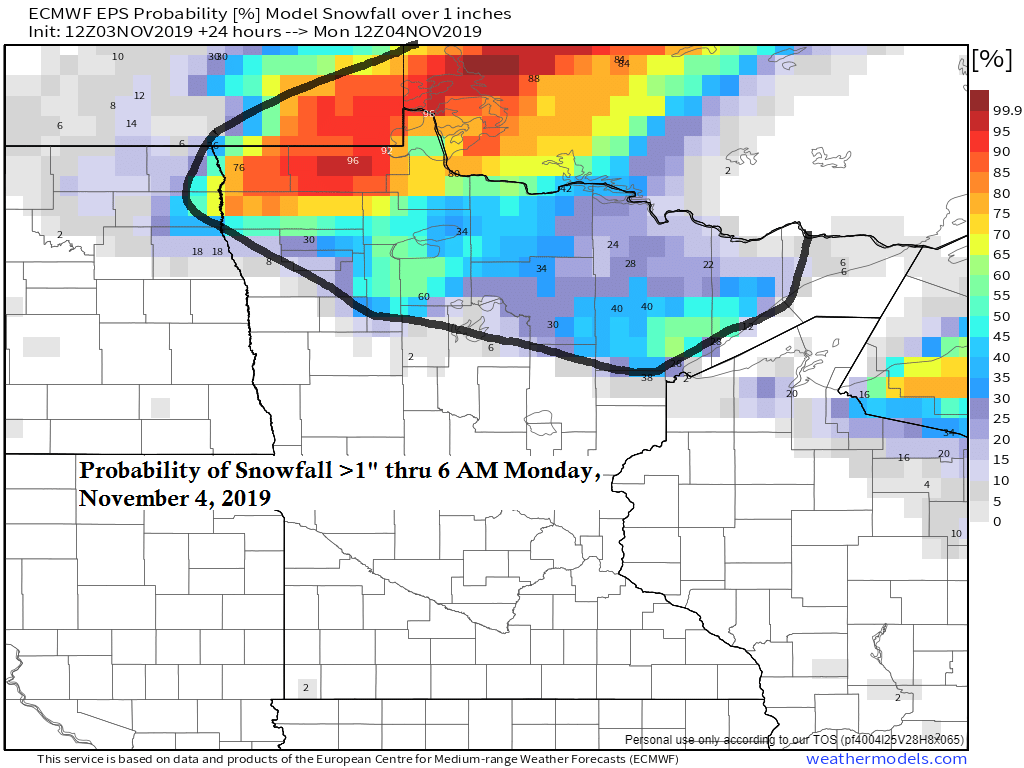 Greatest chance for around an inch or so of snow tonight will be over northern Minnesota per 12z European ensemble model.

There is some milder air out there this afternoon but it won’t make it into the Northland.

Expect some snow in parts of the Northland tonight followed by scattered snow showers during the day Monday.

Snowfall totals were well above normal last month indicated by the purple colors on the map below.

Temperature and Precipitation report for Duluth, Minnesota for October 27-November 2, 2019

Mostly cloudy skies and chilly temperatures today with highs in the 30s which is roughly 5 to 10 degrees below normal for November 3rd.

If you enjoy cold temperatures this forecast is for you! The pattern is locked in place, no signs of it changing thru mid month. Any warm ups we get around here the next 2 weeks should be short lived, and really not that impressive. Instead the cold temps will be the bigger story as reinforcing shots of very cold air push south into the upper Midwest for the next 2 weeks.

This pattern is also relatively quiet for our area, although we will likely have a few systems impact the Northland this week with some snow, but no major snow events (4-6″+ amounts) are expected this week.

One system will affect us tonight with a little snow, and for some of us a rain-snow mix. Temperatures aloft remain cold enough for snow tonight, but near surface temps will be hovering in the 33-35 degree range this evening especially in northwest Wisconsin and eastern Minnesota which leads to a possibility of a rain-snow mix, but with wet-bulb temps of 32F, this could cause the surface temps to fall a few degrees close to the freezing mark causing more snow than rain.

Not expecting much in the way of snow accumulation where it does snow tonight with amounts ranging from 0.5 to 1.5″.

Lows tonight will range from the upper 20s to lower 30s with a variable wind direction from 4 to 12 mph.

A blustery Monday ahead with scattered snow showers. Winds will be out of the northwest at 10 to 20 mph with gusts to around 30 mph. Highs on Monday are forecast to be in the 30s.

Cold on Tuesday but mainly dry during the day followed by a burst of light snow in parts of the area Tuesday night-early Wednesday as a reinforcing shot of cold air moves in. Highs Tuesday ranging from the middle 20s to around 30 degrees.

.Tonight… Some light snow possible which could be mixed with drizzle closer to Lake Superior. Snowfall accumulations of an inch or less. Mostly cloudy. Low 30 to 33. Wind east 5 to 15 mph becoming west overnight.