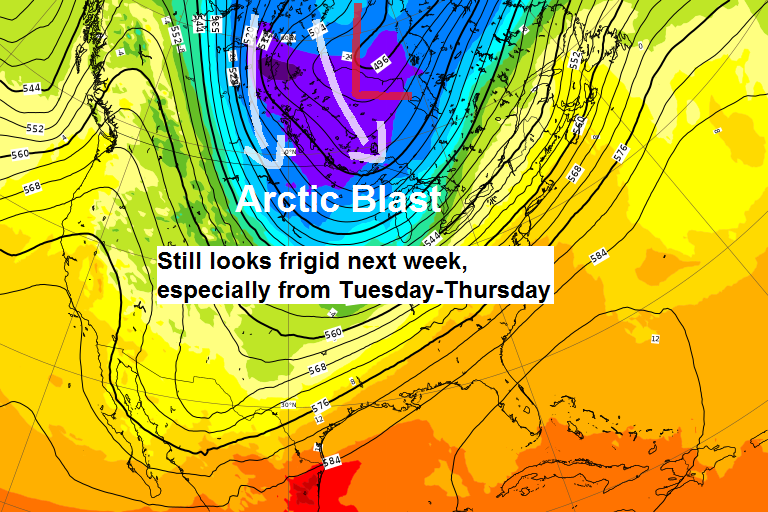 A weak system moving through the area tonight will bring a little snow to parts of the Northland with accumulations of around a half inch to one inch possible.

Combination of a warm front and cold front moving across the area may cause some light snow or mixed precipitation including the potential for patchy light freezing rain/freezing drizzle in parts of the Northland Saturday afternoon into Sunday morning. Snowfall and ice accumulations will be very light, but it only takes small amounts of ice to cause travel issues.

Radar loop below is from 8 PM Friday to 8 PM Saturday per 18z NAM-WRF model.

I’m still keeping an eye on the computer models for a possible snow event which may affect parts of the Northland early next week.

The other big story for next week is the shot of arctic air which is forecast to cover the upper Midwest and Great Lakes. The coldest days look to be from Tuesday through Thursday, December 10-12.

The good news is it looks like temperatures will modify a bit later next week.

Temperatures won’t be too bad this weekend, in fact many of us should rise above the freezing mark late Saturday/early Sunday.

A burst of light snow is possible tonight otherwise skies will be mostly to partly cloudy with lows in the single digits and teens. Winds will be out of the south at 5 to 15 mph.

Highs on Saturday are forecast to range from the upper 20s to lower 30s with mostly cloudy to partly sunny skies. There could be some patchy mixed precipitation in parts of the area especially Saturday afternoon into Saturday night. Winds on Saturday will remain out of the south at 10 to 20 mph.

Note: Strong warm air advection will move into the area late on Saturday with 850mb temperatures forecast to range from around +5 to +7C. Could see temps climb toward 40 degrees for a few hours in southern portions of the Northland late Saturday night-Sunday morning due to the amount of warm air advection.

A cold front moves SE through the area Sunday morning with spotty mixed precip possible. Temperatures on Sunday will fall into the middle teens to middle 20s across northern Minnesota, while milder temps linger for one more day in east-central Minnesota and northwest Wisconsin with highs in the 30s.

Accumulating snow is possible Sunday night into Monday especially across east-central Minnesota into northwest Wisconsin including in the Twin Ports. Early snowfall estimates per model data shows the potential for 2 to 6 inches of snow in the aforementioned areas. Stay tuned.

Bitterly cold air follows the early week snow event with highs in the single digits below to single digits above zero for Tuesday, Wednesday and Thursday while overnight lows range from around 10 below to 30 below zero. Note: Dangerously cold wind chills are likely for the early to mid part of next week, possibly as cold as 30 to 40 below.

.Tonight… Mostly cloudy. Some light snow possible with accumulations less than an inch. Low 10 to 15. Wind south 5 to 15 mph.