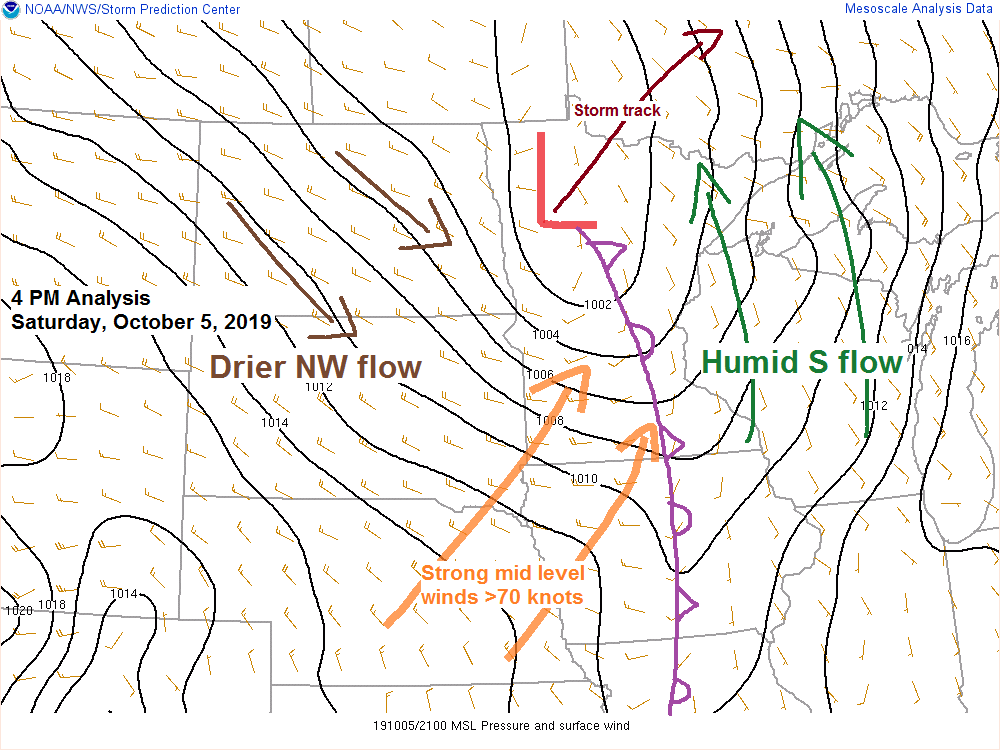 Low pressure which brought the rain, drizzle and fog to the Northland today is moving northeast. Somewhat nicer weather ahead for Sunday, but it will be windy and a few showers are expected as well, but not the widespread wet weather like we had today.

Quite the system lifting NE across the upper Midwest today per Goes-16 satellite imagery. Source: https://weather.cod.edu

In weather you usually don’t see such straight lines, in this case moisture as we’re looking at the water vapor imagery (dry air shows up in yellow)

Check out the north to south or south to north (depending on how you look at it) band of moisture stretching from central Minnesota to eastern Kansas which has been moving east today thanks to a frontal boundary which is pushing the richer low level moisture off to the east.

Radar forecast valid through 1 AM Monday — Showers linger this evening in the Northland followed by some drier weather. A few showers return especially Sunday afternoon and evening.

The end of next week could turn a little interesting in the Northern Plains and upper Midwest.

1) Computer models are in pretty good agreement in showing an area of low pressure moving out into the Central Plains around next Thursday, October 10. This low is then forecast to lift north while possibly slowing down as it does so during the October 11-13 time frame. Note: Red line on map shows the potential track of the low.

2) Much colder temperatures are expected to move into the Northern Plains by midweek, and this cold air will eventually make it into the Northland either next Friday or Saturday (October 11-12)

3) Based on the current storm track and where the cold air and moisture is forecast to setup, the greatest potential for accumulating snow would be over parts of the Dakotas into northwest Minnesota (dark blue area on map)

5) There is uncertainty with this system which is typical for a storm that is 5 days away. The storm track could shift further west or east in coming days which would shift the snow or rain to snow areas shown on the map below. The storm could also speed up limiting the amount of snow that may fall on the cold side of the system.

Windy weather on the way! Low pressure will deepen as it lifts northeast out of northwest Minnesota tonight, this low is forecast to be near Hudson Bay Canada Sunday afternoon. Central pressure of the low is forecast to drop from ~1000mb Saturday evening to ~985mb by Sunday afternoon. A tight pressure gradient will setup across the upper Midwest through Sunday with low pressure to the north and high pressure to the southwest. Winds across the Northland will shift from south to the west-southwest tonight and will remain in that direction Sunday. Wind gusts of 20 to 35 mph are expected later tonight through Sunday.

Light rain and drizzle with areas of fog will continue this evening, but the rain will diminish and fog will lift from SW-NE tonight as drier air works into the area from the SW.

Lows tonight will be in the 40s with some clearing expected late.

Highs on Sunday will be close to normal or a little below normal for early October with highs ranging from the upper 40s to middle 50s. Should see a little more sun Sunday compared to what we’ve had the last few days, but clouds and a few showers are also expected.

Next Monday and Tuesday, and even most of Wednesday are looking nice around here. Quite a bit of sunshine is expected Monday and Tuesday with more clouds arriving Wednesday. Highs Monday are forecast to be in the 50s to around 60 degrees, warming into the 60s for Tuesday and Wednesday.

Rain chances increase mid to late next week as a potentially strong trough and area of low pressure affects the area. May also see some snow or a rain-snow mix in parts of the Northland between October 11-13.

.Tonight… Fog, drizzle and showers this evening. Becoming windy late with some clearing. Low 43 to 47. Wind south to southeast 10 to 20 mph becoming west to southwest 15 to 30 mph.

.Sunday… Windy. Partly to mostly cloudy. A few showers possible in the afternoon. High 53 to 58. Wind west to southwest 15 to 30 mph.