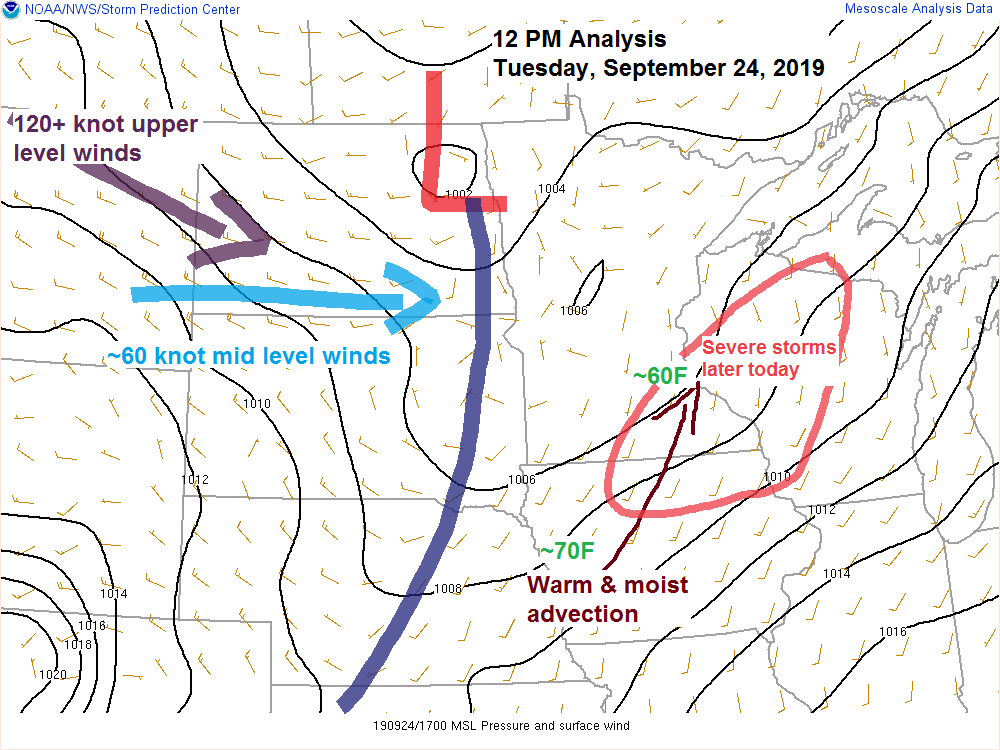 Still looking at a risk for severe weather late this afternoon and this evening in parts of the Northland with the greatest chance across southern portions of northwest Wisconsin, generally east of a line from around Shell Lake to Upson.

There is a marginal risk of severe thunderstorms in northern Minnesota for late this afternoon and this evening, and also in northwest Wisconsin (west/north of the slight risk area)

Main threats from storms later today and this evening will be from hail and gusty winds with downpours and lightning also occurring with the storms. Note: There is a chance for a few tornadoes early this evening from southeast Minnesota into central Wisconsin.

Today’s severe weather setup is a potent one and includes strong jet stream winds approaching from the Northern Rockies and Northern Plains while southerly winds ahead of a cold front transports warm and humid air northward into the upper Midwest.

An area of 2000-3000 J/kg of surface-based CAPE across eastern Nebraska and western Iowa early this afternoon will advect NE by late this afternoon, so there will be plenty of potential energy for convection. Strong wind shear will also be in place, along with steep mid level lapse rates. A few rotating thunderstorms are possible late this afternoon-early this evening with potential for very large hail greater than 2″ in diameter and perhaps a tornado or two from southeast Minnesota into central Wisconsin.

A separate area of thunderstorms including a low risk of a severe thunderstorm exists across north-central Minnesota later today with hail and gusty winds possible. Instability will be lower in northern Minnesota with CAPE of ~500 J/kg, but the combination of steep mid level lapse rates and the approach of an upper level trough could produce a few strong storms in northern Minnesota later this afternoon. Source: https://www.spc.noaa.gov

Strong jet stream energy can be seen diving SE out of Montana today per Goes-16 water vapor satellite imagery, this combined with the approaching cold front and upper level trough will enhance the lift in the atmosphere which will cause scattered strong to severe thunderstorms to break out late this afternoon-evening from south-central Minnesota to central Wisconsin. Source: https://weather.cod.edu

Note: A few showers are possible in Duluth and Superior late this afternoon into tonight, but the risk for thunderstorms is quite low, and any severe weather is forecast to remain either north or south of the Twin Ports.