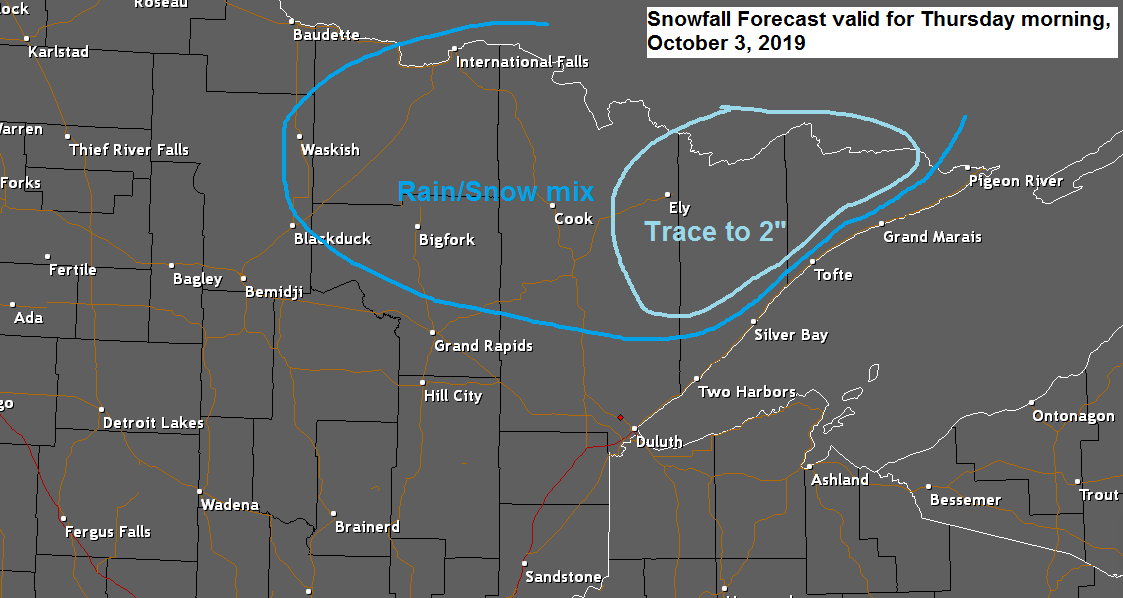 Time to celebrate! First snow of the season is on the way Thursday morning in far northern Minnesota. Note: No snow is expected in Duluth with this event, just rain.

Timing of when the rain mixes with or changes over to snow in far northern Minnesota looks to be early Thursday morning roughly from Midnight to 4 AM. Snow or a rain/snow mix continues through Thursday morning before ending from west to east Thursday afternoon.

Temperatures in northern Minnesota Wednesday afternoon are forecast to be in the low to mid 40s so it will take some time for enough cold air to move in before we get some snow, but by Thursday morning temperatures are forecast to range from around 32 to 36 degrees thanks to dynamical cooling processes as heavier precipitation rates help to pull down some colder air from higher up in the atmosphere.

Yes the ground is warm and much of the snow that falls may melt on contact, but if it snows long enough and heavy enough, then there could be some slushy accumulations especially on grassy surfaces Thursday morning in far northern Minnesota.

White line on images below indicate the approximate location of the rain-snow line at the times shown on the images below.

A wet September 30th in the Northland

After Thursday’s system moves away, will get a one day break in precipitation on Friday which will be followed by another system which affects us on Saturday.

A massive ridge continues to cover the southern/eastern portions of the U.S. today while a strong trough covered the western U.S. An active SW flow aloft remains in place across the Plains and Great Lakes between the ridge and trough.

Mostly cloudy skies will be found in the Northland tonight with a few showers possible over parts of northwest Wisconsin. Lows will be in the upper 30s to middle 40s with north to northeast winds 5 to 15 mph.

An area of high pressure will be over Ontario Wednesday and Thursday while low pressure moves E-NE out of the Central Plains.

Looks mainly dry in our area during the day Wednesday although there could be a few lake effect showers near Lake Superior with easterly winds coming off the lake, then will see rain chances increase across the entire Northland Wednesday night. High temperatures on Wednesday will be in the mid 40s to mid 50s with east winds 5 to 15 mph except near Lake Superior where wind gusts to 25 mph are possible.

Another round of rain is forecast to affect the Northland starting late Wednesday afternoon or evening. Rain will continue overnight Wednesday then will end from west to east on Thursday.

Colder air moving into far northern Minnesota Thursday morning should cause the rain to mix with snow, and in some locations the mixed precipitation could change to all snow. Temps aloft are forecast to range from -1 to -3C at 850mb, and around -1C at 925mb, both of which are cold enough for frozen precipitation, but in the end it will depend on how much of that cold air mixes down to the surface as to whether or not will get the rain to mix with or change to snow Thursday morning.