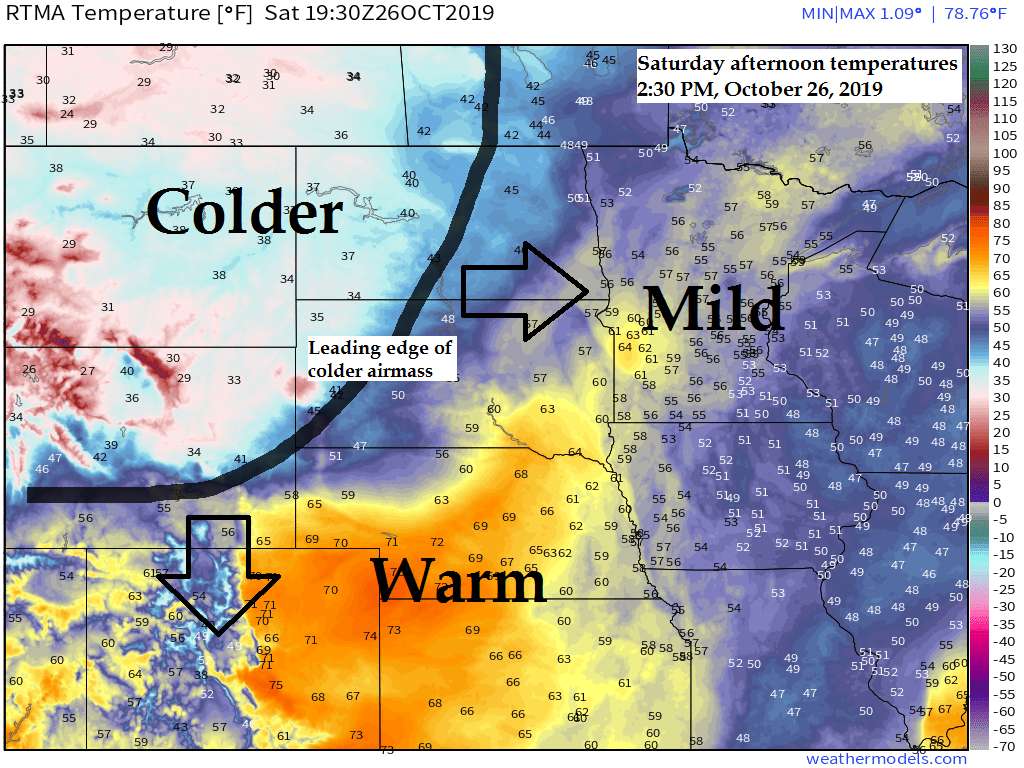 What a beautiful day! High temperatures today were in the middle 50s to lower 60s in northeast Minnesota and northwest Wisconsin which is 10 to 15 degrees warmer than normal for October 26th.

Early stages of a new weather pattern can be seen on water vapor imagery today. An upper level trough digging south out of the Northern Rockies thanks in part to a strong low pressure system (remnants of Olga) lifting quickly north into the central and eastern Great Lakes late today.

With only a few days left in October here is the temperature anomaly map through the 25th.

Still keeping an eye on two potential snow makers in the coming week.

The first one is forecast to miss the Northland to the south/east from late Monday into early Tuesday, but a second system may come far enough west/north to impact portions of the Northland with some accumulating snow later next week, most likely on Halloween into early Friday (October 31-November 1) but confidence remains low on that late week system.

The map below shows where we may see cyclogenesis occur early to midweek with 3 possible storm tracks shown as black lines on map. The most likely track per Saturday’s model runs is track number 2.

Forecast models have been struggling quite a bit for next week, so changes in the storm track are certainly possible in regards to the mid to late week system.

A colder pattern is still expected during the upcoming week with the greatest departures from normal centered on the Rockies and Plains (-10 to -25 degrees below normal!) indicated by blue and purple colors on image below.

A cooling trend is on the way!

850mb temperatures late this Saturday afternoon ranged from +6C in Duluth to -4C in Bismarck, and looking upstream shows -10 to -12C 850mb temps in Alberta and Saskatchewan, this colder airmass will be moving south/east the next few days.

Cold front will move through the Northland tonight into Sunday morning. Clear to partly cloudy skies this evening becoming partly to mostly cloudy late. A few rain or snow showers are possible late tonight in western areas but this won’t amount to much.

Lows tonight will be in the 30s to lower 40s with south-southwest or northwest winds 10 to 20 mph.

Cooler on Sunday under partly sunny to mostly cloudy skies. Could see a few rain or snow showers in parts of the area but nothing widespread or significant. Highs Sunday ranging from the middle 30s to lower 40s with northwest winds 10 to 20 mph.

Monday and Tuesday look mainly dry in our area, although a few snow showers can’t be ruled out in spots. Highs mainly in the 30s with lows Monday night in the 20s to around 30 degrees.