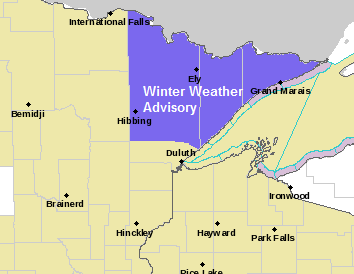 Winter weather advisory for mixed precipitation has been issued for parts of northeast Minnesota (purple shaded area on map below) from 10 PM this evening to 10 AM Sunday.

Plan on slippery road conditions late this evening into Sunday morning. Use caution if traveling.

Some cities included in the advisory

Looking at two areas with potential for 1 to 2 inches of snow.

Area one is over far northeast Minnesota, the second area includes portions of northwest Wisconsin.

An inch or less of snow is possible in Duluth and Superior, also including the cities of Moose Lake, Solon Springs, Hibbing and Cook.

Less than an inch of snow farther west from around International Falls to Grand Rapids to Aitkin to Sandstone.

Radar forecast from 7 PM this evening to 10 AM Sunday.

Expect a mixture of precipitation in parts of the Northland later this evening with precipitation ending from west to east Sunday morning.

The first half of November has been very cold! Check out the average temperature/departure from normal from November 1-15.

Note: A nice break from the arctic air today with highs across the Northland ranging from the upper 30s to upper 40s. For Duluth and International Falls, today’s +40 degree temps were the first since late October.

An area of low pressure and a cold front will move across the Northland tonight/Sunday morning — Expect some light snow and mixed precipitation in the area later this evening through Sunday morning as this system moves through.

Temperatures warmed up quite a bit today, and at 5 PM temperatures were still in the upper 30s to lower 40s so it will take a while for the temps to become cold enough to support frozen precipitation, but with late day dew points in the upper 20s, there is some room for the temperature to drop closer to the dew point prior to when the precipitation reaches the ground later this evening. Note: Temps aloft are also too warm for frozen precip early this evening with 850mb temperatures around +2C, but these are also forecast to become cold enough by later tonight for some snow or mixed precip.

Mostly cloudy skies are expected tonight with lows ranging from 29 to 35 degrees. Winds will be out of the south at 10 to 20 mph, shifting to west-northwest with the passage of a cold front.

Low pressure and cold front exit to the east on Sunday but mostly cloudy skies are forecast to persist behind this system with patchy drizzle and snow showers possible. Highs Sunday will be in the 30s with winds becoming northwest 10 to 20 mph.

A clipper system could affect parts of the Northland sometime Monday-Tuesday morning with a little snow or rain possible but only light amounts of snow are expected for areas that get snow.

Another system has been showing up in model guidance around November 20-21 but the main impacts from that one may end up splitting the Northland to the north and south with only a little snow or mixed precip possible in our area the middle of next week the way it looks now.

.Sunday… Mostly cloudy. Patchy drizzle or light snow possible in the morning. High 34 to 38. Wind west to northwest 10 to 20 mph.