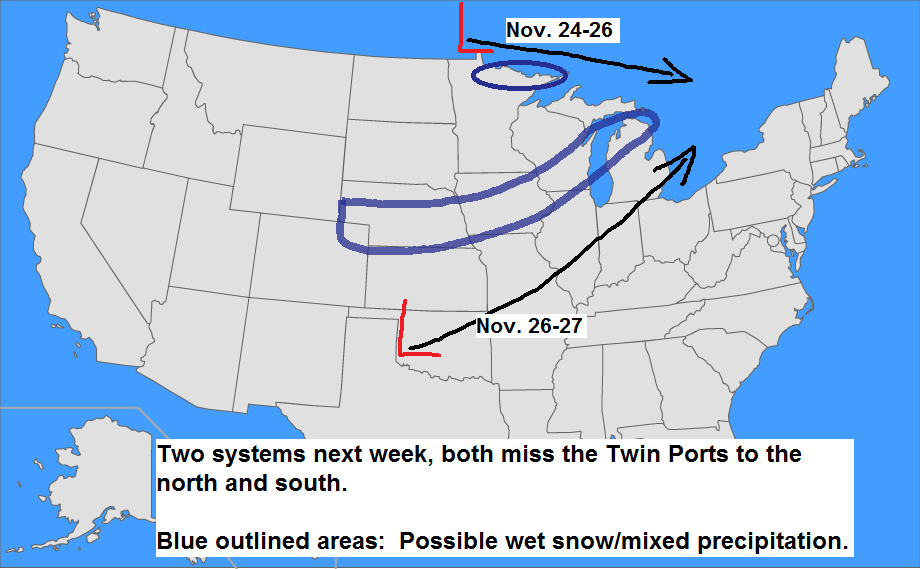 I don’t see any big changes happening in Duluth until we can get the split flow to relax a bit, storm tracks to shift a bit, or until we can get some phasing of the northern/southern branches of the jet stream, but sometimes these split flows once they get going are very tough to break out of, and by the way, computer models do an awful job when we have split flows which is why we have seen major swings in model guidance over the last few days from one run to the next.

Note: Black lines on the map below indicate the forecast storm tracks.

Temps have warmed up considerably during the past week, but average temperatures so far this month continue to run below normal by some 5 to nearly 8 degrees.

Temperature anomaly for the Lower 48 for November 2019 (thru the 21st) Source: https://lab.weathermodels.com/

It’s been several days since the last time we saw this much sun in the Northland. Skies today were mainly sunny with seasonable temps with highs in the upper 20s to lower 30s.

For the most part this weekend looks dry across the Northland despite a few weak troughs which will pass through the area.

Partly to mostly cloudy skies are expected from tonight through Sunday, so expect at least some sunshine both Saturday and Sunday.

Lows tonight will be in the teens and 20s with lows Saturday night in the 20s to around 30 degrees.

Highs Saturday and Sunday are forecast to be in the 30s with lower 40s possible across southern parts of the area.

Winds tonight will be out of the southwest at around 10 to 15 mph with west to southwest winds Saturday at 10 to 20 mph.

A more organized area of low pressure is forecast to pass north of the area early next week, this system could bring a little wet snow or mixed precipitation to northern Minnesota from late Sunday into Monday but this doesn’t look like a real big deal at the moment as the swath of heavier snow stays north of our area across parts of Ontario.