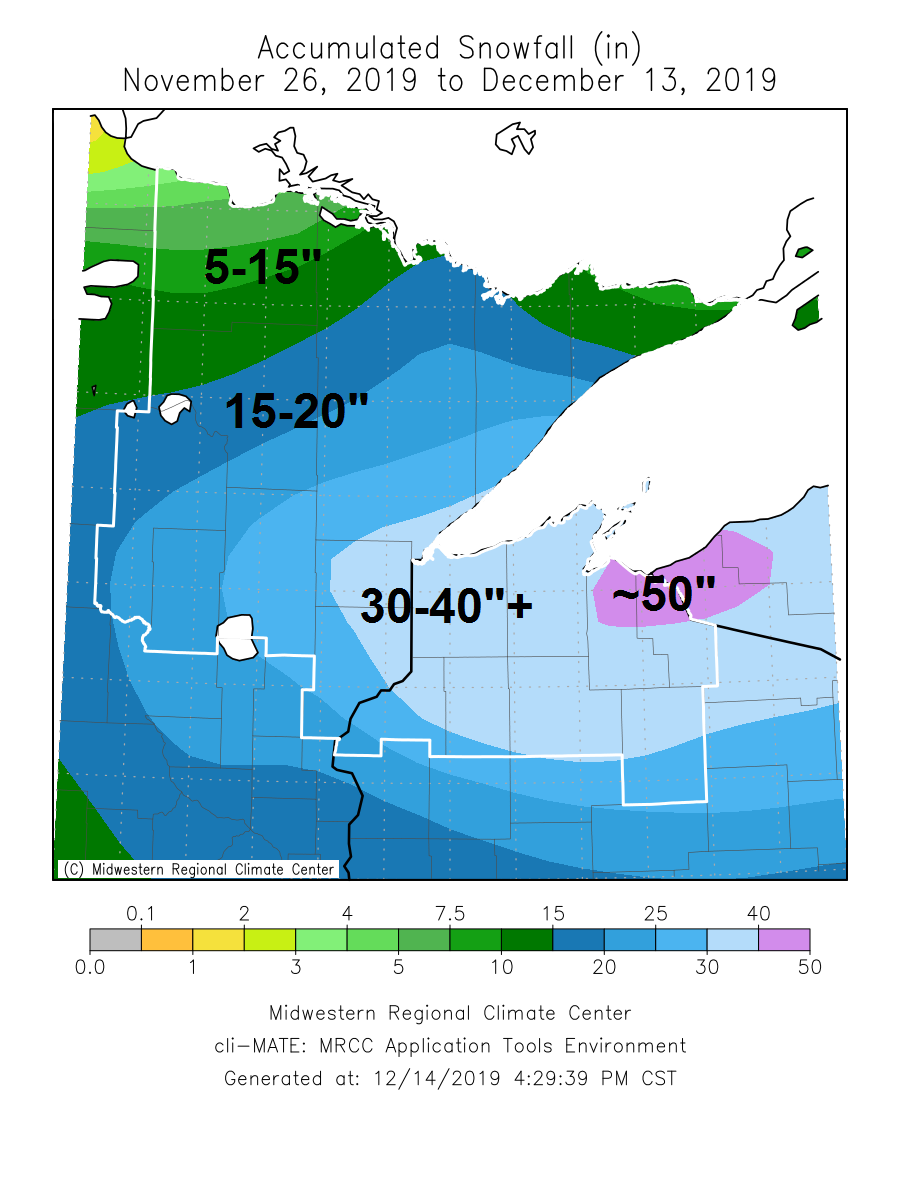 *Duluth has had 4 one-inch or greater snowfall events so far this month (thru the 14th) this is what we typically get for the entire month of December.

*19.6″ of snow so far this month in Duluth. If we don’t get another flake of snow the rest of this month we would still finish with above average snowfall for December.

The week ahead will begin on a chilly note across the upper Midwest and western Great Lakes with below normal temperatures expected (blue colors on map) but temperatures are forecast to modify by late next week.

It does appear the snow machine will be turned off at least for a little while in the Northland with a drier than normal pattern expected into late month per Euro ensemble model. This doesn’t mean it won’t snow at all the next 2 weeks, but any snow that does fall will most likely be on the light side with no major snow events expected at least through next weekend, or through December 22nd.

No doubt it’s been a rough stretch of weather in parts of Northland including here in Duluth with so much snow over the last 2 1/2 weeks, over 3 feet of snow in Duluth! The good news is it looks like will finally get an extended break in major snow events, so now would be the time to try and make room for the next stretch of snowy weather which probably isn’t too far away.

High pressure will move SE out of eastern North Dakota tonight and will be over southern Minnesota/northern Iowa by Sunday afternoon.

Clear to partly cloudy skies tonight with frigid temperatures with lows in the teens and 20s below zero, but it will be a little warmer along the South Shore with lows in the single digits to lower teens above zero. Winds tonight will be out of the west or northwest at 5 to 15 mph.

Partly to mostly cloudy skies for Sunday with highs in the single digits to lower teens. Winds will shift to the southwest at 10 to 15 mph.

A few weak systems will pass through the region Sunday night through Tuesday. Will only see a few flurries or light snow showers with each system with little if any accumulation expected.

Note: It does look like will get a bit of thaw beginning ~December 20th, and this could carry over into Christmas. Daytime highs could get close to the freezing mark, if not above freezing on a few days.