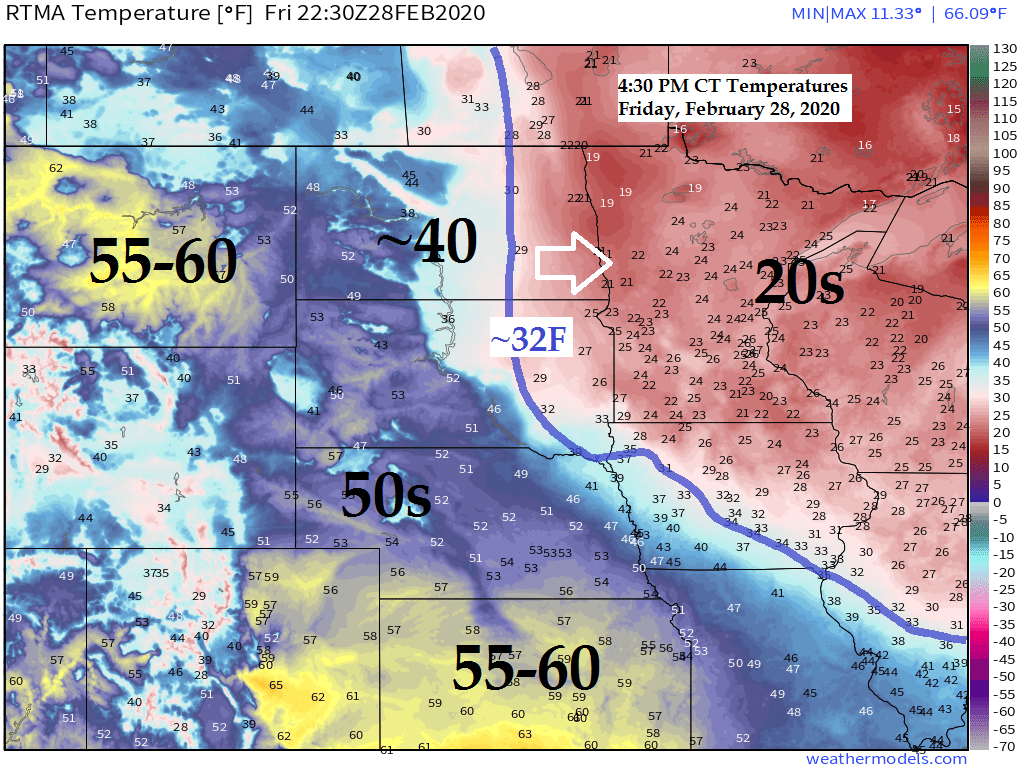 Cold air lingers over the Northland today, but those milder temperatures off to our west are finally moving this way, and will arrive over the weekend.

The freezing line (blue line on map) will be moving east on Saturday and should make it through most of the Northland as milder Pacific air heads east this weekend.

Our stretch of quiet weather continues into next week.

High pressure over eastern South Dakota moves SE toward the Ohio Valley on Saturday. Southerly return flow develops on the back side of that high which will result in warm air advection spreading into the Northland tonight and Saturday. Note: 850mb temperatures across the Northland of around -10 to -15C late this afternoon will climb to around +1 to +7C by Saturday evening.

Clear to partly cloudy skies for this evening will become partly to mostly cloudy overnight as a warm front moves east out of the eastern Dakotas. Could see some patchy fog develop in parts of the area early Saturday morning, but this should lift before Noon Saturday. There is also a risk for a few flurries or perhaps some patchy light freezing drizzle Saturday morning, mainly in far northern Minnesota.

Highs on Saturday will be in the 30s with a few 40s possible over western sections of the Northland.

A cold front swings through the Northland on Sunday, but this will be a dry frontal passage. Mild temperatures Sunday with highs in the upper 30s to middle 40s, and I still think there is a chance that some locations in our area will make a run at 50 degrees on Sunday.

Looking ahead to next week – No major storm systems impacting northeast Minnesota or northwest Wisconsin, but there could be a weak system or two during the week which could bring a light dusting of snow or a light rain/snow mix to parts of the area, but that’s about it, nothing major the way it looks now.