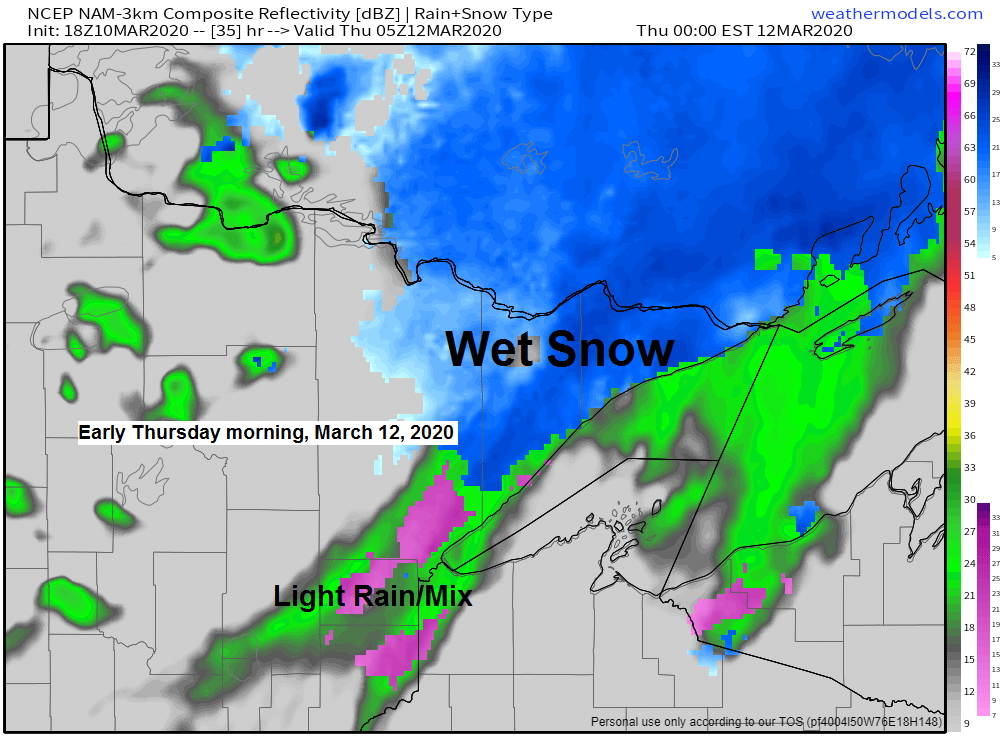 A little rain, a little wet snow on the way Wednesday night and Thursday. Time to panic, buy some more TP!

This pattern is great if you like the occasional light precipitation event in northeast Minnesota and northwest Wisconsin.

I don’t see any changes in this pattern through next week, and perhaps through the rest of March given how this pattern has been more or less locked in place for over a month now.

There could be a few light precipitation events across the Northland through next week, but the chances for a major storm to hit our area is very low unless the southern branch of the jet lifts far enough north, or we get some phasing to occur between the northern and southern branches of the jet stream.

A few systems moving across the northern tier of the US and Canada the next few days.

One system is moving into the upper Midwest this afternoon, while upstream there’s another system over northwest Canada today, and this one will affect the Northland Wednesday night and Thursday with some light precipitation.

Here’s a look at tonight’s system which is mainly affecting southern Minnesota where some rain and wet snow is falling late this afternoon with movement to the ENE.

Simulated radar forecast below goes from 1 PM Wednesday to 1 PM Thursday. Rain in green, snow in blue, mix in pink.

With very little weather (in our area) to talk about, figured I’d share some photos I’ve taken over the last few years, I’ll probably include a few pics in future posts this week, or until the weather turns a little more active around here which doesn’t look like it will happen anytime soon, enjoy!

Note: The pics below are of the St. Louis River in Fond du Lac, MN, and of Lake Superior.

According to a report released by the Army Corps of Engineers, water levels on Lake Superior have dropped about 3 inches since February 6th (press the panic button)

But, hold on, water levels on Lake Superior remain well above the long-term average, so nothing to see here. Moving on…

Weak system scoots south of us tonight with most of the snow and rain staying south of the Northland, but the northern fringe of this system affects far southern areas this evening with a little wet snow and rain (Hinckley to Hayward line and south)

Mostly cloudy to partly cloudy tonight with lows ranging from the single digits up north to around 20 degrees in east-central Minnesota and northwest Wisconsin.

Partly to mostly cloudy for Wednesday with highs in the upper 30s to middle 40s except lower 30s in the tip of the Arrowhead.

Low pressure with its warm front and cold front will move across the Northland Wednesday night and Thursday bringing some light rain, snow and a wintry mix to the area.